Harry had a busy day at work and was completely exhausted by the time he got home. He barely managed to put some food into his belly, as his body and mind were cravings to hit the sack for a long night of deep slumber. He placed his smartphone on his bedside drawer and settled in for the night. As his mind was drifting off to sleep, his phone beeped loudly, indicating that it was low on charge. He would not have enough time to charge the device in the morning before going to work. So he had to do it right away. Mumbling and grumbling at the device, he groggily got up to start looking for his charger. God, the charger was downstairs in the living room! Suffice it to say that he got the charger, but his sleep was interrupted and he was not happy at all. His trouble would have been solved if he had a magnetic charging cable. Harry would simply have charged his phone without leaving his bed. 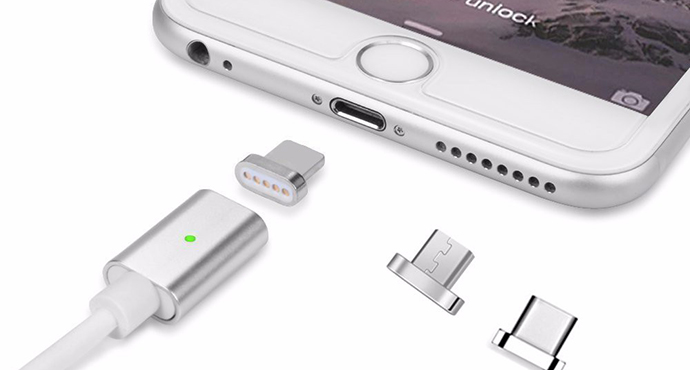 What Is a Magnetic Charging Cable?

There is a distinction between this cable and a wireless charger. The wireless charger does not use any wires when charging the phone. The Magnetic cable is a micro USB or lightning port connector, which magnetically charges your device by wirelessly connecting with an adapter or dongle placed on the tip of the cable or power bank. In this way, the device will be charged in a quasi-wireless mode. Although this is not purely wireless charging technology, it does away with plugging a conventional charger and cable into your device. The cable is ideal for devices that do not have pure wireless charging capabilities and makes it convenient to charge without fumbling around for a charger.

Using the magnetic cable is simple and does not need much effort. There is a connector which attaches to the back of your device, and this must remain plugged in. Then there is the adapter, which plugs into the tips of the connector. Now place your device close to the magnetic tip and it clips into place and starts charging your device.

What Is Pure Wireless Charging?

There are a handful of Smartphones that support pure wireless charging technology, such as iPhone X, iPhone 8, Samsung Galaxy S8, just to mention a few. These devices do not need any cable in order to charge the battery.

The wireless charger comes with a special mat or tabletop, on which you place the device and it begins charging wirelessly. The wireless charger comes in various shapes and designs. Some are simply mats like those you place your mouse on, while others are embedded into furniture (tabletop). This mat is plugged into an electrical outlet, and the device starts charging when placed on the mat.

How Does Wireless Technology Charge the Device?

Both the magnetic cable and the wireless mat use magnetic fields to charge the device. Energy is transferred from the charger to the receiver on the back of the device through electromagnetic induction. The charger has an induction coil, which creates a sporadic electromagnetic field. This is then converted by the receiver into electricity which is directed into the battery for charging.

The device and the wireless charger or magnetic cable should be close together for the technology to work efficiently. The device also has to be properly aligned with the connector or mat in order to charge properly.

How Fast Is the Magnetic Charging Cable?

The connector and adapter work as a proxy and therefore have no difference in charging speed when compared to conventional charging. The magnetic field developed is powerful enough to develop a strong electrical current to charge the phone at the same speed as a conventional charger. On the other hand, pure wireless charging is slower than charging with a cable. Another problem with pure wireless charging technology is that it cannot be done on a device that has a metal back. The device should have a glass or plastic back for the tech to work. The technology may also not work on devices that have thick plastic backs – the back must be made of thin plastic. This greatly reduces the number of devices that can use pure wireless charging technology, as opposed to the magnetic cable which can work on any device with a USB Type-C port.

When it comes to the magnetic cable, you simply place the device near the tip of the connector and it snaps into place with no assistance from you. Harry would groggily have pushed his device next to the cable, heard the click as the cable got into the pace and continued his journey down into dreamland.

Considering the high cost of devices that use pure wireless charging, the market uptake has been slow. However, the manufacturers of the Magnetic Charging Cable are confident of its rapid uptake, since the cable can work on a wider range of devices, and is not as expensive as the wireless mats and tabletops.

The adoption of the magnetic charging cable is progressing faster than that of pure wireless charging technology. There has been a rapid progression in the development of fast-charging and reversible connectors in recent years, whereas the development of pure wireless charging technology seems to have hit a plateau. People want versatile methods of wirelessly charging their devices without having to plug in chargers and cables. The simple and less-costly option is that of the magnetic cable, and this is why it is set to be the norm for charging in the near future.

When choosing a magnetic cable for charging your Smartphone, you will have to decide whether you want a Micro USB or lightning cable. The full kit is low-cost and is a technological advancement that you should adopt right away.